Saint Loup gave jockey Rafael Bejarano the third of his four wins — from as many mounts — with a neck victory in the $54,750 feature Friday at Betfair Hollywood Park. Second at 7-10 odds in his Santa Anita finale March 22, Saint Loup, a French bred son of Zamindar, won for the first time in four starts in the United States as the 3-5 favorite. Able to save ground throughout after breaking from the inside in a field of eight, Saint Loup awaited room approaching the stretch, angled outside longshot Warrant to gain the lead in midstretch, then held off 7-1 shot Ain in the closing yards. Trained by Julio Canani for Tarma Corporation and Michael Whieldon, Saint Loup covered the 1 ¼ miles on turf in 2:01.14 and paid $3.20, $2.40 and $2.10. Out of the Priolo mare Sanada, Saint Loup’s win was his second in 11 starts. The $32,400 payday boosted his earnings to $119,460. No worse than third in four of his six races on grass, Ain, who was last for a majority of the 10 furlongs, returned $4.60 and $3.20. He finished 2 ½ lengths clear of Vibrato Jazz, who paid $3.60 to show. Completing the order of finish were Warrant, Sumerian, who is also trained by Canani, Unusual Beam, 5-1 second choice Zackn’mat and Teafatiller. The defending Spring/Summer riding champion, Bejarano also won Friday’s fourth race with Include the Cat, the fifth with Master Chef and the eighth with Apollo Ten. His only other mount — sixth race favorite Trojenna — was scratched at the starting gate. Bejarano’s big day enabled him to move closer to a significant milestone. He is 14 victories away from 3,000 in a career that began in his native Peru in 2001. 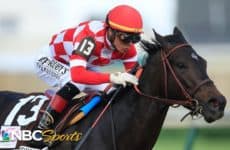 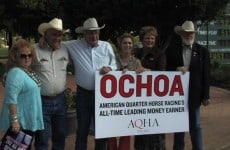 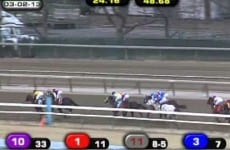