What a great video of John Simon!  He’s an amazing stallion.  Check him out JOHN SIMON, is a 2006 15’2 hand multiple World Champion bay and white Tobiano Stallion. He is by APHA multiple World Champion sire Special Invitation by Invitation Only. John Simon’s Dam, Sensational Leaguer, is a multiple World and NSBA Champion, has over $100,000 in lifetime earnings, and is by NSBA Hall of Fame sire Zippos Sensation and out of the great AQHA mare Cookie Leauger. We feel confident that these Champion bloodlines will ensure his future as a sire as it has made him a Champion in the show pen. John Simon is shown at all major shows by Erin Bradshaw and is proudly owned by Charla Bradshaw. 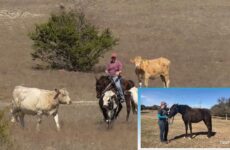 Royale – stunning foxtrotter trail horse and she lies down to mount! 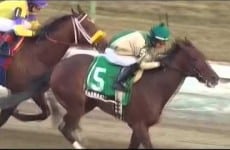 Palomino and his ball :)