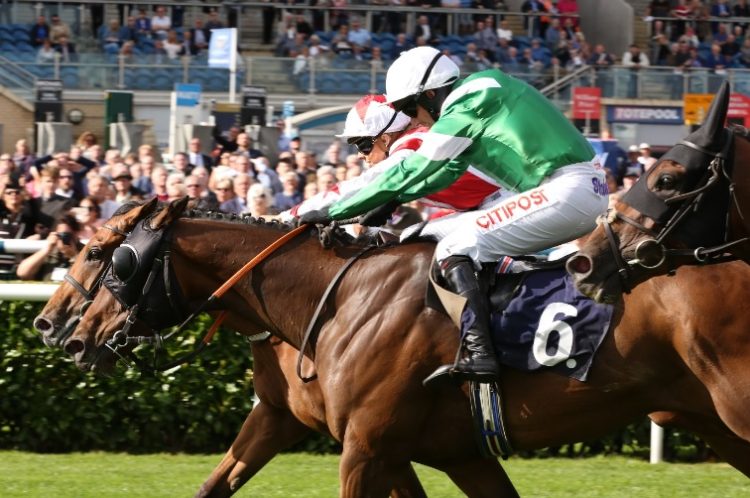 Doncaster Racecourse: A look back at 2020 St Leger Day

Last Saturday marked the 244th running of the World’s oldest Classic, the St Leger Stakes. And, whilst the historic race was supposed to go ahead in front of a
restricted crowd at Doncaster Racecourse, this was later changed, due to the ever-changing circumstances that surround the coronavirus pandemic.

However, albeit behind closed doors, the race still went ahead, and if you are looking for the horse racing results from the final day of the St Leger Festival, then look no further. Read on to find out more!

1:15: Sky Sport Racing HD Virgin 535 Handicap – (Class 2) (3yo+) 1m
After winning the Division 1 Novice Stakes back in June, 5/2 market favourite Matthew Flinders picked up his second win of the year at Doncaster Racecourse.
With Tom Marquand in the saddle, the three-year-old was ridden into the lead one furlong out and held on to beat Magical Morning and Frankie Dettori by just over a length.
1. Matthew Flinders – 5/2F
2. Magical Morning – 7/1
3. Diocles of Rome – 7/1

1:50: Champagne Stakes – (Group 2) (Colts &amp; Geldings) 7f
It may have been just Chindit’s third race outing, but the two-year-old continued his sparkling winning form. The Richard Hannon-trained colt won the Maiden Stakes at Doncaster and the listed Pat Eddery Stakes at Ascot back in July and showed his class again in the Champagne Stakes. Jockey Pat Dobbs steered Chindit past favourite Albasheer and State Of Rest one furlong out and held on to beat the former by a length.
1. Chindit – 15/8
2. Albasheer – 7/4
3. State Of Rest – 13/2

2:25: Portland Handicap – (Class 2) 5½f
16/1 outsider Stone Of Destiny provided the biggest shock on St Leger Day. Despite the Portland Handicap being the five-year-old’s 27th race, it was his first outing at Doncaster, and he went on to a surprise victory, for the first time since August 2019.  Jockey Silvestre De Sousa kicked Stone Of Destiny, who was held up in midfield, into action around one furlong out, and the Andrew Balding-trained horse had enough about him to hold off favourite Danzeno, and win by a length and a quarter.
1. Stone Of Destiny – 16/1
2. Danzeno – 11/2F
3. Yimou – 25/1
4. Arecibo – 15/2

3:00: Park Stakes – (Group 2) 7f
The 3:00 Park Stakes provided one of the most thrilling races of the day, with Wichita and Dettori narrowly beating One Master over the line after a captivating
duel. In what was a tense finish, the Aidan O’Brien-trained horse, who lost by a half-a-length at the festival last year, crossed the line neck-and-neck with the Marquand saddled One Master. However, an incredibly close photo finish deemed that Wichita had crossed the line first.
1. Wichita – 11/4F
2. One Master – 7/2
3. Molatham – 3/1

3:35: St Leger Stakes – (Group 1) (British Champions Series) 1m6½f
Now onto the biggest race of the day, and the last Classic of the British Flat season, the St. Leger Stakes. Dettori and Santiago were the pre-race favourites at 5/2, but it 4/1 shot Galileo Chrome, who was ridden by Marquand in unusual circumstances, that landed the victory. Shane Crosse, who is usually in the saddle of the Joseph
O’Brien-trained colt, was forced to drop out of the race, due to testing positive for COVID-19, and replacement Marquand went on to win his first British Group One
and Classic, holding off 9/1 outsider Berkshire Rocco by a neck.
1. Galileo Chrome – 4/1
2. Berkshire Rocco – 16/1
3. Pyledriver – 9/2

—
De Sousa picked up his second St Leger Day victory on board Lone Eagle (3/1) in the 4:05 Matthew Clark Nursey Handicap, whilst Jim Crowley continued his
impressive season with a victory in Away he Goes’ (10/3) saddle in the final race of the day, the 5:15: Magners Dark Fruit Cider Handicap.