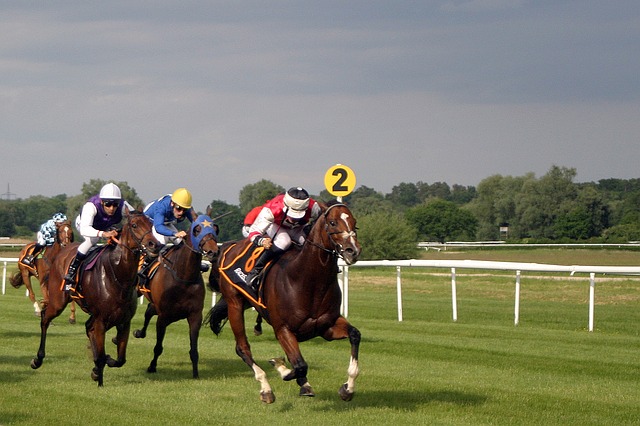 Blitzkrieg Racing: 4 Signs that Makes a Horse a Champion

Like all other sports, no one can predict the outcome of a horse race. No matter how much you study about the horses and the jockeys, consistently winning is just impossible. However, through researching, you can give yourself an educated guess.

You might not be correct all the time, but at least as your guesses are getting close, you’ll eventually win once in a while. When it comes to horse racing, there are telltale signs that can tell if a horse will do great during the race.

From its track record to its behavior in the paddocks, these signs can help you gauge a horse’s performance and see that it might win. But what are these signs, and what do they mean?  Read on as we will talk about them in detail. Hence, here are some telltale signs that a horse will do great in the race.

Researching the horses’ track records is a good point to start your research. As we all know, it’s generally a good bet if the horse has consistently won in the top three in its previous races. However, we emphasize the word “recent” because this information is irrelevant if those races are old.

Of course, that’s not the only thing you should look out for. You also have to check the factors that made the horse consistently win in the top three in recent races. For example, try to look at the track surface. Is it synthetic, turf, or dirt?

When they run on dirt, especially when it’s raining, their hooves will burrow under the mud, impeding their run. With that, they tend to be faster on synthetic because of the power of their steps and nothing to reduce their speed.

You can also check the type of race they are in. This is because horses can also get picky when it comes to whether the race is circular or straight. Some thoroughbreds are faster in a short distance, making them a king in a straight line, while some have more power in turns, making circular tracks their preferred tracks.

We’re not saying that horses are emotional beings. We’re saying that just like human athletes, they also feel emotions like being nervous, fussy, and even showing confidence. But how is this relevant? Your mindset can make changes in your performance, which is the same for horses.

When a horse is sweating and appears irritable, that might mean the horse is nervous and is generally not ready to race. But when a horse is calm and has steady steps, that’s a good sign that a horse is in a good mindset and is ready to run.

If a horse has rested poorly, as it didn’t have time to rest well, it will be underpowered in its next race. However, when a horse has too much rest, it will be too relaxed, won’t be in its peak performance, and won’t have the right mindset to race.

That said, what should be the number of days that a horse should rest? Actually, there’s no correct number, but it should be between 30 to 60 days. If this criterion is met, the horse will perform great during the race. However, you should also remember that if a horse has rested
too much, it will only return to its peak performance after 1 or 2 races.

One of the most common sayings you’ll hear in horse racing is don’t expect a horse to do something it has never done before. This saying is straightforward and can be interpreted as not expecting a horse to win a particular race before.

This is sound advice because most of the time, a horse would not win a race if it had never won in that specific race yet. The contrary is true. For example, if the horse has won the Kentucky Derby before, that horse would be a great bet on the next Derby.

Remember that even if a horse has shown all of the signs listed above, it doesn’t mean that it will guarantee its win. It’s just that it has a good chance of winning. There are many more factors that you should look out for, like jockey experience and the race odds, but the ones listed above tend to be more evident than the others. What we can guarantee, though, is that if a horse showed these signs, it’s great for the horse to bet on.