Not Quite ‘Swan Lake,’ but Surprisingly Close an article on Dressage

Not Quite ‘Swan Lake,’ but Surprisingly Close
By ROSLYN SULCAS
Published: August 9, 2012 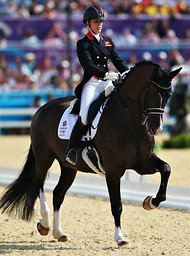 This seems appropriate since no one writes about dressage without describing it as ballet for horses. And that is why I, a dance critic, watched three televised hours of people in stiffly buttoned jackets and top hats on horses Thursday morning, as 18 riders competed in the individual Olympic dressage final at London’s Greenwich Park.

So is dressage really ballet for horses? My first observation is that, as in ballet, form is all-important. The horses must lift their hooves with precise delicacy, canter in a way that makes them seem to float across the arena and extend their legs beyond their normal range. (I know you dressage specialists are rolling your eyes at my civilian terminology. I feel for you; the other day I had to endure a gymnastics commentator describing a double pirouette in attitude derrière as a “good spin with leg lifted behind.”) The horses must also do this in time to music, which ranged from a Billy Idol mash-up to the patriotic pomp of Elgar’s “Land of Hope and Glory” (that from the gold medalist, Charlotte Dujardin of Britain.)

Their movement vocabulary is also far more limited than a dancer’s. There are apparently 38 set movements in dressage, but only a few are readily apparent to the novice eye.

The art here is not just the horse’s skill and precision in executing these movements, but the rider’s ability to instruct solely through the subtle use of reins and leg pressure. (Like dancers in a pas de deux, they are not allowed to speak.) The apparent calm and near-indifference that the riders appeared to exhibit as their horses went through their paces reminded me a bit of the way ballet dancers are supposed to make their difficult accomplishments look entirely easy, as if anyone could do it. And the way that certain horses seemed to me to possess more grace, musicality and flow of motion than others reminded me, too, of the irrational preferences fans can have for one dancer over another.

So yes, my crash course leads me to conclude that the ballet-for-horses description is right, in a limited way. But some burning questions remain. Do the horses feel they are moving to the music? Are they expressing themselves? Can a horse convey a sense of performance? Perhaps so: No doubt the judges who marked Dujardin at 90.089 (as in gymnastics, the score combines technical and artistic marks) and the silver medalist Adelinde Cornelissen at 88.196 would be able to explain why they and their horses were more than 10 percent better than the vast majority of competitors. But to me, some horses just moved better than others, and those that did appeared to be really dancing.

A version of this review appeared in print on August 10, 2012, on page B16 of the New York edition with the headline: Not Quite ‘Swan Lake,’ but Surprisingly Close.

The Beauty Of Showjumping